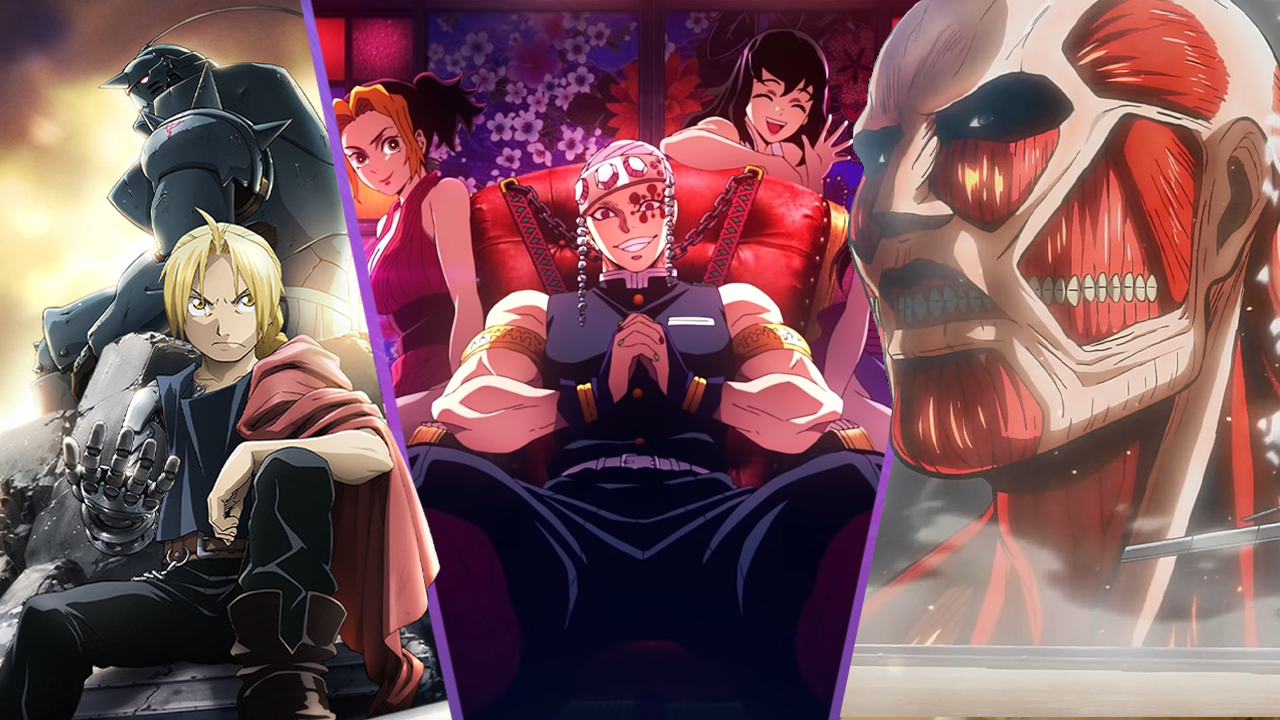 Anime is as incredible as it is versatile. With a foothold in every genre, the selection of Japanese animation on offer is as broad as the scope of television and film itself, considered a medium of entertainment in its own right. With that massive choice, however, it’s very easy to get lost on where to start – whether you’ve only experienced anime watching the classics growing up; like Dragon Ball Z, Pokémon, and a few Studio Ghibli films; or the concept is new to you entirely. So, if you’re deciding what to recommend to a friend, or you’re looking to dive in yourself, here are 5 of the best anime for beginners.

Also in the market for some anime-esque video games? The GameByte Shop now has a stellar anime-inspired game collection starting from £5.95. This includes Sword Art Online, Dragon Ball, Fire Emblem, Battle Chasers, Tales of Arise, Triangle Strategy, and many more.

1. Attack on Titan (Shingeki no Kyojin)

For the completely uninitiated, Attack on Titan has been a frequent go-to when it comes to showing off that anime isn’t just for kids. In fact, the world of this dark fantasy Shonen and its lore is just immersive and timeless as any pop culture franchise, like Harry Potter or Lord of the Rings, for adults of all ages.

What is Attack On Titan About?

Humanity is on the brink of extinction, with the vast majority slaughtered by the giant man-like Titans over 100 years ago. The remainder of human civilisation has been hidden away behind three great walls, living in peace for over a century. Our young protagonist, Eren Yeager, watches that peace shatter; as the Titans breach the walls, flood the city, and eat countless citizens alive – including his own mother.

The rest of the series follows an older Eren and his comrades as new recruits in the military, tasked with taking back their territory from the Titans, wiping them out, and saving the rest of humanity.

A story set in such an action-packed, violence-heavy, post-apocalyptic world is what anime newcomers will be used to – settling them right in as the power of animation enhanced all of those elements and more. Whereas live-action is physically limited in stunts and cinematography, Attack on Titan is a sample of anime’s potential being literally limitless, with every one of its many battle scenes being an absolute thrill ride. This is especially when characters use the show’s signature weapon, the 3D Maneuver Gear, to get around like a steampunk Spider-Man.

With all of that though, the story is still the best part of this anime for beginners – as Eren and his colleagues in the military’s Survey Corps delve deeper into the mystery behind the Titans themselves. As the layers get peeled back, your perspective on the series will change entirely as you go, making a re-watch a near-certainty.

Where You Can Watch Attack on Titan

Most anime titles out there are widely available these days. Still, it’s best to watch via a subscription if you’re not ready to buy the show on blu-ray.

Who loves a good murder mystery? What about time travel? Well, here’s both. It might not be the most heard of, but Erased is one anime not to miss.

What Erased Is About

Erased introduces Satoru Fujinuma, an unsuccessful late-20s manga artist working as a pizza delivery man, never really living life to the fullest since childhood. Suddenly, a near-death experience sends him back in time, into the body of his 11-year old self with all of his memories as an adult. After remembering he’s returned to the year of a string of child murders, Satoru has to use his knowledge of the past and present to stop those tragedies from ever happening, and change the future.

As a whodunit mystery thriller with a supernatural twist, there’s even more under the surface as to what makes Erased so captivating. Through the eyes of Satoru, reliving his childhood memories as an adult, you can easily become immersed in enjoying the comparative simplicity of childhood – how easy it is to take it for granted before the weight of adulthood weighs us down.

Meanwhile, limited only with his physical abilities as a kid, Satoru has to use his wits and maturity to overcome his previous missteps, out-manoeuvring his opponent murderer from the past to stop them reaching their targets. At the same time, he makes new discoveries looking at the same events with his older emotional intelligence – rekindling his spark for life. As a child, it’s easy to not learn empathy until you’re an adult. As an adult, however, it’s easy to forget how to enjoy life until you see it again as a child. Without giving too much away, Erased is one of the most emotional, heart-warming anime out there. And you’ll love every second of it.

Where You Can Watch Erased

While you may search and spot “Erased” on Netflix, that’s actually the subpar 2017 live-action adaption of the anime, which is definitely recommended you avoid.

If you want to watch the Erased anime, it’s availabl Cto stream right now on Crunchyroll, Hulu, and Funimation.

Demon Slayer: Kimetsu no Yaiba is probably the most popular amongst anime not just on this list, but in the industry right now entirely. With how the hit show’s 19th episode ending up trending worldwide on Twitter back in 2019, such hype isn’t hard to understand.

What Demon Slayer: Kimsetsu No Yaiba is About

In the Taisho era of Japan, Demon Slayer has us join Tanjiro Utada, one of the most wholesome and kind-hearted protagonists of all time. Even when he returns home to see his family brutally butchered by a demon. That is except for the sole survivor, his sister, Nezuko, who has now been turned into a demon herself. Training in swordsmanship as a member of the Demon Slayer Corps, Tanjiro sets off to avenge his family, defeat their leader, and cure his sister.

To start, what makes Demon Slayer so approachable as an anime for beginners is its premise. Badass swordsman vs demons. It’s a classic tale of good against evil, as old as time. From there though, the rest of the story shines using a colourful cast of characters – adding more as the story unfolds to have you emotionally invest into each of them.

Then, there’s the action. Kimetsu no Yaiba’s studio, Ufotable, is known for crafting some of the most visually and audibly impressive anime out there. To that effect with each episode of Demon Slayer, it’s almost as if you’re watching a cinematic-level production. With one key goal in each fight; cut the demon’s head off; Demon Slayer uses everything at its disposal to up the stakes, make every brawl stand out from one another, and make every big showdown feel unique. As said, it’s a classic tale of good vs evil, and it feels like such a triumph when good prevails. Demon Slayer is truly amongst the best action anime.

Where You can Watch Demon Slayer: Kimetsu No Yaiba

Demon Slayer IS available to watch on Netflix, but only the first season is available. If you want to see the entirety of the show, including the second season’s incredible Entertainment District arc, you should watch Demon Slayer on Funimation, Crunchyroll, or Hulu.

An action spy comedy, this is the only one amongst these best anime for beginners that’s currently airing. Despite only being partway through its first season, Spy x Family is already one of the best anime of 2022.

What Spy X Family Is About

Twilight, an elite codenamed agent is assigned the task of spying on the leader of a rival nation. The only way to get close though, is to infiltrate the private school of said leader’s son, and pose as a rival parent. To succeed, Twilight creates a false identity, also adopting an orphan and marrying a stranger to pose as his wife and child. Unbeknownst to him, his new daughter is a telepath and his wife a professional assassin. Neat.

Despite its multiple layers, Spy x Family adds up to one easy-to-define experience: hilariously wholesome. You have Loid/Twilight – the capable no-nonsense straight man, Yor – the air-headed but deadly killer, and Anya – the cute toddler that can read minds, so is the only one who knows as much as the viewer. With this trio of dysfunctional personalities with unique abilities in uncanny situations, nothing ever goes as planned. To that end, every episodes gives you more reason to fall in love with each of them.

So many TV series try so hard to be funny, but Spy x Family is one of the best comedy anime you can find.

Where You Can Watch Spy X Family

You can watch Spy X Family right now either on Crunchyroll or Hulu.

We’re saving arguably the greatest for last. That’s because for many, Fullmetal Alchemist: Brotherhood is considered to be one of the best anime of all time.

In the fictional land of Amestris, Alchemy – a medieval chemical science of our world – is used in abundance for both science and military applications. This of course, is within the law of equivalent exchange: in order to obtain something, something else of equal value must be lost. It was under this concept that two young alchemists, Edward and Alphonse Elric, used alchemy in attempt to bring their mother back to life. They failed. In exchange, Ed lost his right arm and left leg, while Al lost his entire body – his soul bound to a suit of armour.

To restore their bodies whole, the Elric brothers seek the Philosopher’s Stone, a fabled and mythical alchemic tool that can seemingly unlock limitless power to defy the impossible. Edward, equipped with automail prosthetic limbs, later becomes a qualified state alchemist for the military. Then, the two soon discover a deep-seeded government conspiracy that affects not only them, but the entire nation as well.

This steampunk adventure wields a heavy premise. Nevertheless, courtesy of incredible writing and world-building, Fullmetal Alchemist: Brotherhood not only boasts a multitude of other genres; dark fantasy, comedy, horror, action; but it defies the law of equivalent exchange itself – creating something even greater than the sum of its parts.

Even coming into Fullmetal Alchemist as an anime beginner, it’s array of emotionally intelligent themes will still hit you from the get-go. Exploring corruption, war discrimination, and political greed, there is also is the fleeting fragility of life – both the science behind it, and the joy it brings. But most importantly, there’s also family, brotherhood, and love.

Although there are many parts at play, from intense action and eery horrors to heartfelt comedy, no other TV series blends between these different elements so seamlessly. This is as good as anime gets.

Where You Can Watch Fullmetal Alchemist: Brotherhood

While the show has been on Netflix in the past, the only Fullmetal Alchemist on there right now is the awful live-action film adaptation. Sadly, it seems they never learn.

What do you think is the best anime for beginners to get started on? Let us know on our socials!

Looking for Star Wars recommendations? Checkout which film to watch next in our ranking of the whole franchise from worst to best.

Along with the latest games, merch, and accessories, the GameByte Shop has an epic Loyalty Points Scheme – earning you points for every £1 you spend to redeem for huge discounts!

Also, sign up to our newsletter to be notified of new-gen console drops, deals, and more. Please note the GameByte Shop is available for UK customers only.